The Eyes of Laura Mars

In The Eyes of Laura Mars, Faye Dunaway plays a fashion photographer haunted by visions of murder. She feels compelled to recreate her visions in her fashion photography (by photographer, Helmut Newton, for the film.) The striking controversial and confrontational style of her photography propels her to stardom in the New York fashion world, and leads to gallery openings and a book of her editorial work, also called The Eyes of Laura Mars. Her newfound fame draws the killer out of hiding and, through her visions, she watches helplessly as he or she murders her co-workers. As with Virginia in Sette Note, she is afraid to explain her visions for fear of being thought of as crazy. She’s been photographing murders that are nearly identical to police photographs of recent murders she’s had no knowledge of, and now the murderer is moving close to home, killing those closest to her. Once the police investigator rules her out as the killer, he must accept that her visions are valid, even if they can’t be explained.

Like Virginia, Laura Mars’ character shows a slightly more conservative and sophisticated side to the fashion of the late 70’s. While she is less conservative than Virginia, she doesn’t dress at all like the models in her photographs, and her clothes are definitely a step up from the average working woman in America (note the more plain blazers, blouses, and skirts of the reporters who interview her at her gallery show in the opening scenes of the film. She is the idealized “dress for success” look mentioned at the beginning of this paper. Once again, the film seems to take place in the fall. While Virginia’s look is extremely pulled together (each piece absolutely designed to go with each other), Laura Mars’ clothing is beautifully layered, textured, and soft with a “mixed look” that combines separates we can imagine she chose from her closet. The result was an original and personal ensemble. This creative mixing and matching is a kind of elevated street chic admired by many women but hard to pull off on your own.

Laura Mars’ clothing is beautifully layered, textured, and soft with a “mixed look” that combines separates we can imagine she chose from her closet. 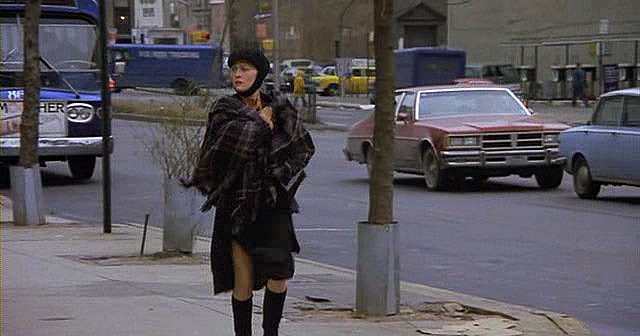 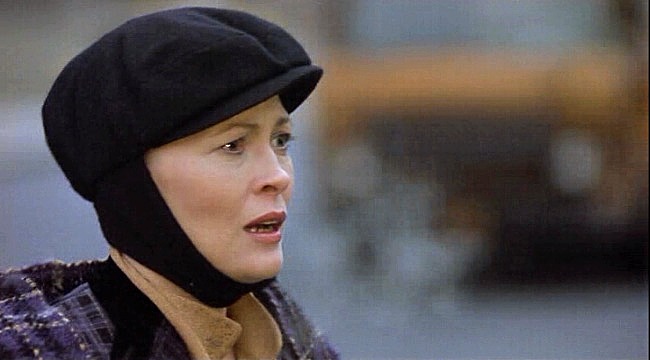 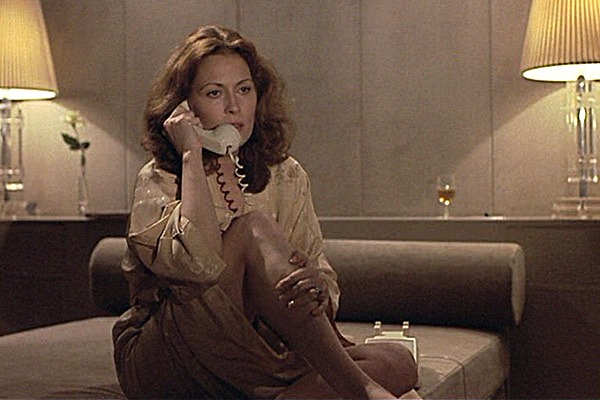 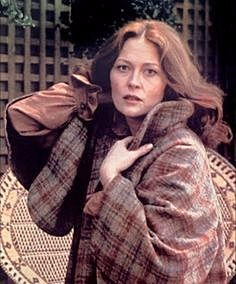 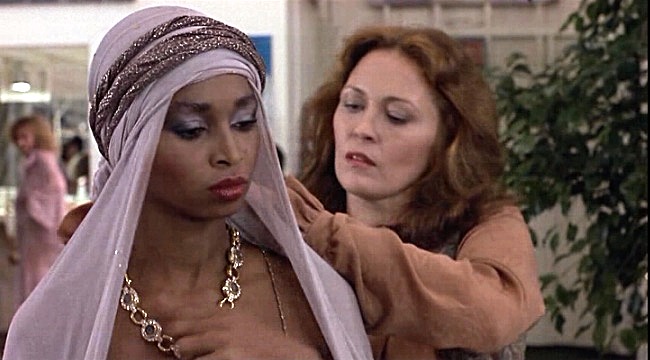 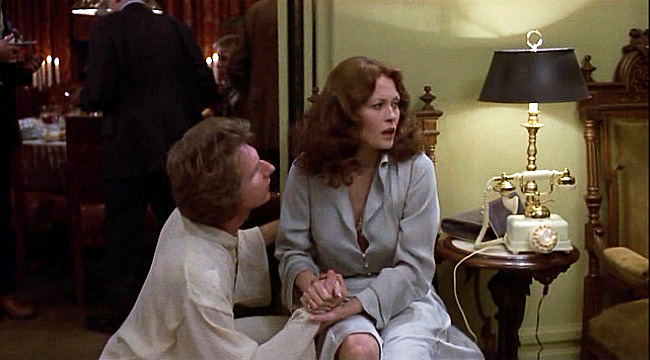 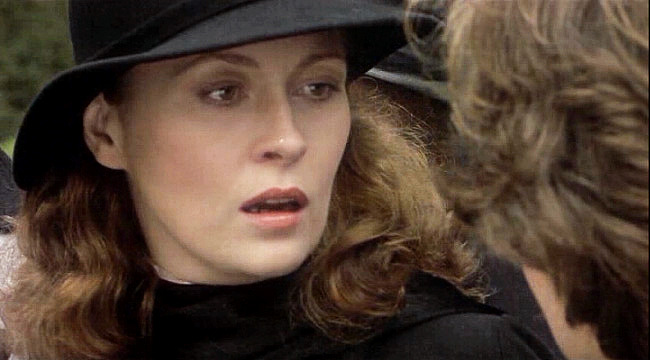 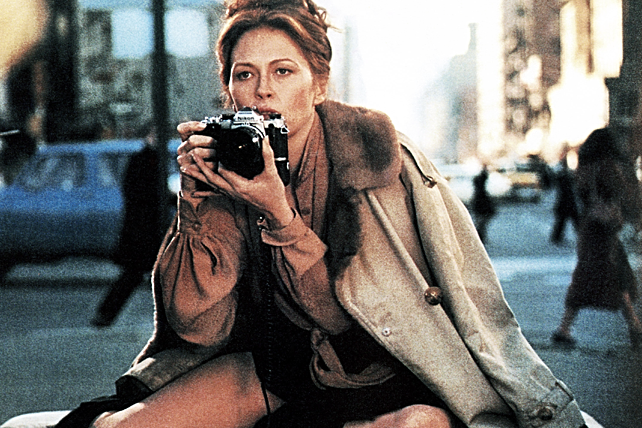 Laura Mars’ clothing colors are basically in the same color range as Virginia’s — autumn and some jewel tones. Laura wears softer silk blouses, in many instances, with buttons that don’t start until the bust line. This isn’t a very realistic look for the office, but this character is an artist who is very successfully self-employed. In the first murder scene of the film, Laura is wearing a layered ensemble while looking over the clothing for her outdoor shoot. She wears a gold-colored,soft, silk, long-sleeve blouse with a dark purple and black plaid jacket and, what appears to be, a wool shawl. The shawl has a wider plaid pattern in the same purple and black color scheme with a touch of gold that compliments the color of her blouse. Her black culottes that have a slit in each leg to the mid thigh with knee-high black suede boots. All of this creates a classy but sexy look. She isn’t wearing anything overtly revealing, but the soft silk of the blouse and the elegant trousers that show off the leg must have been the envy of women watching this film. The slits in her culottes look fashionable but are part of a “costume.” The film required her to move a lot while doing her photography, and wearing a skirt while squatting and stretching would have looked awkward to say the least. These pants gave her a wonderful freedom of movement that is both elegant and sexy.

By 1978 we can see American Vogue hailing the “new soft look”— loose silk blouses, long skirts or comfortable pants in silk. “The dress that’s going to turn a lot of women on to dress-dressing again.” “Geoffrey Beene’s two- piece looking one-piece silk satin —all bias slide on the body and a resin cord to pull it very lightly just below the waist. There is evidence of this in Laura Mars’ clothing but it is taken to an extreme exotic look for the models in her shoots. You can compare some of the hairstyle and exotic clothing between the models in Laura Mars and a more conservative version of this look for the sister-in-law Gloria in Sette Note in Nero filmed a year or two prior. One of the models even sports the same modern update of a 1920’s hairstyle like Gloria does in a scene from Sette Note. Perhaps a version of the 20’s style reflected some of the excess associated with the

While Sette Note in Nero is a film that I especially like, I can see the differences between our two female characters partly in the fashion they wear — it reflects their “position” in life. Jennifer O’Neill’s character in Sette Note is a woman married to a wealthy Italian man. She mentions that she is an “interior decorator,” but we never see her at her job. She is, more or less, a woman married to a wealthy man. Her clothing comes in complete ensembles, which are stunning, but nonetheless require less creativity on her part and, in a way, reflects the confined existence of a woman owned by her husband more than she may realize.

To mix and match designer’s clothes was a way for women to break free — it takes creativity and a more daring personality.

Faye Dunaway, as Laura Mars, represents a woman who has forged her way to a very successful career. She left her husband and had become more successful than he was. Her clothing is classy and sensual, but, most importantly; looks as if she invented her own look every day. I think, at this period in time, to mix and match designer’s clothes was a way for women to break free. That takes creativity and a more daring personality.

The Eyes of Laura Mars trailer -below- seems to be two trailers in one. Barbara Streisand sings the title song. She had been, at one point, considered for the lead role.

Actually, Streisand's boyfriend, producer John Peters, was a producer on this film. Peters had remade Streisand's image with the 1976 version of A Star Is Born. You can hear a juicy episode dedicated to that film on You Must Remember This Podcast.

Note how the voice over for the Laura Mars trailer goes into Twilight Zone mode midway through. It seems like they weren't quite sure how they should market this film.

The Eyes of Laura Mars trailer

Rebecca Blake was a photography consultant on Laura Mars. She probably also shot extra photographs to fill in for Helmut Newton by using models in the film and

his photography style. The image on the left looks like it could have been shot at the Metropolitan Museum of Art inside one of the French rooms. Blake went on to photograph every star under the sky, including a ton of album artwork in the 1980's. You'll recognize her work if you look at her site here.

Films Connected — an After Note

John Carpenter ( director of Halloween, The Thing etc) wrote The Eyes of Laura Mars. Though two other writers heavily rewrote his original script, mainstream American audiences wouldn’t recognize that Mars was absolutely an Italian Giallo film with an American setting and interpretation. Giallo is a kind of Italian murder mystery that started as detective novels and became a film genre. The first of this Italian film genre is generally considered to be Mario Bava’s The Girl Who Knew Too Much (1963). John Carpenter was an avid fan of this genre and it’s clear that his original script was an attempt to write a Giallo. Somehow the script was picked up, reworked, and cast as an A-list movie rather than a B movie. But the opening sequence, in particular, is pure Italian Giallo cinema marketed to Americans as a thriller. In fact, Sette Note was thought to have stolen from Laura Mars, but the former film was actually made first. Sette Note In Nero, aka The Psychic, was released in Italy on August 10, 1977, but it did not have an American release until March, 1979. For this reason,it was maligned as a rip off of Laura Mars. The Eyes of Laura Mars was released on August 2, 1978.