Sette Note in Nero AKA The Psychic - Plotline

The first film in this comparison takes us to Tuscany, 1977 — in particular Florence and Siena. Jennifer O’Neill plays a woman married to an Italian aristocrat. As a child she had a vision of her mother at the moment her mother committed suicide. Since then she has had “visions” of things that have happened or will happen. Married only six months to her wealthy husband, the opening credits show her seeing him off on a business trip. As she drives alone on the highway to their villa in Tuscany, she has a vision. Her vision gives her only a certain amount of information — a red room with a broken mirror; a magazine on the floor; a yellow cigarette in a blue ashtray; a man who walks with a limp; an older woman who has been murdered; a tune containing seven notes; and, finally, the point of view of a woman being buried alive inside a wall.

When she arrives at the villa, she is shocked to discover it is the room in the final half of her vision. The room where a woman has been buried within the wall. Virginia goes to the cellar; finds a pickax; and opens the wall where, indeed, she discovers a skeleton. The police are called, but, while she is accustomed to her visions being a part of her life, she is at a loss to explain to the police how she could enter a house for the first time and open a wall at the exact spot where a body was buried.

In both Sette Note and Laura Mars, both of our protagonists have visions of murders they are helpless to stop. The stories take place in the “liberated” late 1970’s, but we have a plot device our female characters know sets them back centuries – their “feminine intuition” — and we know how the male characters will react to the stories of their “visions.” In Sette Note, our protagonist, Virginia, has a male friend (conveniently a parapsychologist) named Luca who is sympathetic and believes her, even if at times he is slightly condescending. Her husband, at one point, proclaims he would love her even if she were a witch, but Virginia informs the audience early on that her husband doesn’t believe in her visions, and that she can’t confide

In both films, as our female protagonists begin to unravel the meaning of their visions, they have a need to know who committed the crimes, much of the time with a blindness to their own safety. They move helplessly toward a seemingly predetermined outcome. and every step toward unraveling the mystery pulls them to a closer to a fate that, once set into motion, must inevitably play out.

There isn’t a lot known in terms of specific clothing designers for this film. The director, Lucio Fulici, had worked in nearly a dozen genres in his career and was known for working quickly and efficiently. Shot on location in Tuscany and the city of Siena, in what appears to be fall/winter of 1976, the film had its first screening on August 10, 1977.

Jennifer O’Neill’s furs were donated by Fendi; her jewelry by Bulgari; her hats by Venturi; and shoes by Salato. The costume designer was Massimo Lentini, and wardrobe by Carmen Pericolo .Massimo Lentini would continue to work with Lucio Fulci during the next phase of Fulci’s career which would include seven films and a mini-series all between the years of 1980 -1982. Massimo Lentini worked on costumes or wardrobe (there may be a title difference in Italy) for 17 films in his career that appears to have ended in the late 1980’s when the Italian film system began to suffer a significant downturn.

It is notable that the wardrobe seamstress,Carmen Pericolo, had seven film credits to her name. In Italy, even in the 1970’s, there was still a very strong tradition of tailored, hand-made clothing. Every city had remarkable tailors, shoe makers, and so forth, so it was common to have clothing either created or hand tailored after purchase. Italy has exceptional craftsmanship in every form of clothing and accessories. This craftsmanship is passed down in families and is deeply embedded Italian culture. It’s very possible that Ms. Pericolo tailored or created some of the clothing. She was born and died in the Veneto, a region around Venice known for it’s lace making. In researching issues of Vogue Italia from 1976, I was able to find many similar styles of clothing including an advertisement for a stylist named Venturi who had a boutique in Florence at the time the film was shot. The fall/winter collections from Vogue Italia in 1976 show a much heavier layered look than American Vogue looks in the same year. For example, a turtleneck sweater under a blouse, sometimes with even another light sweater in addition to a long coat or cape can be seen in both the film and Italian Vogue's September, 1976, issue. 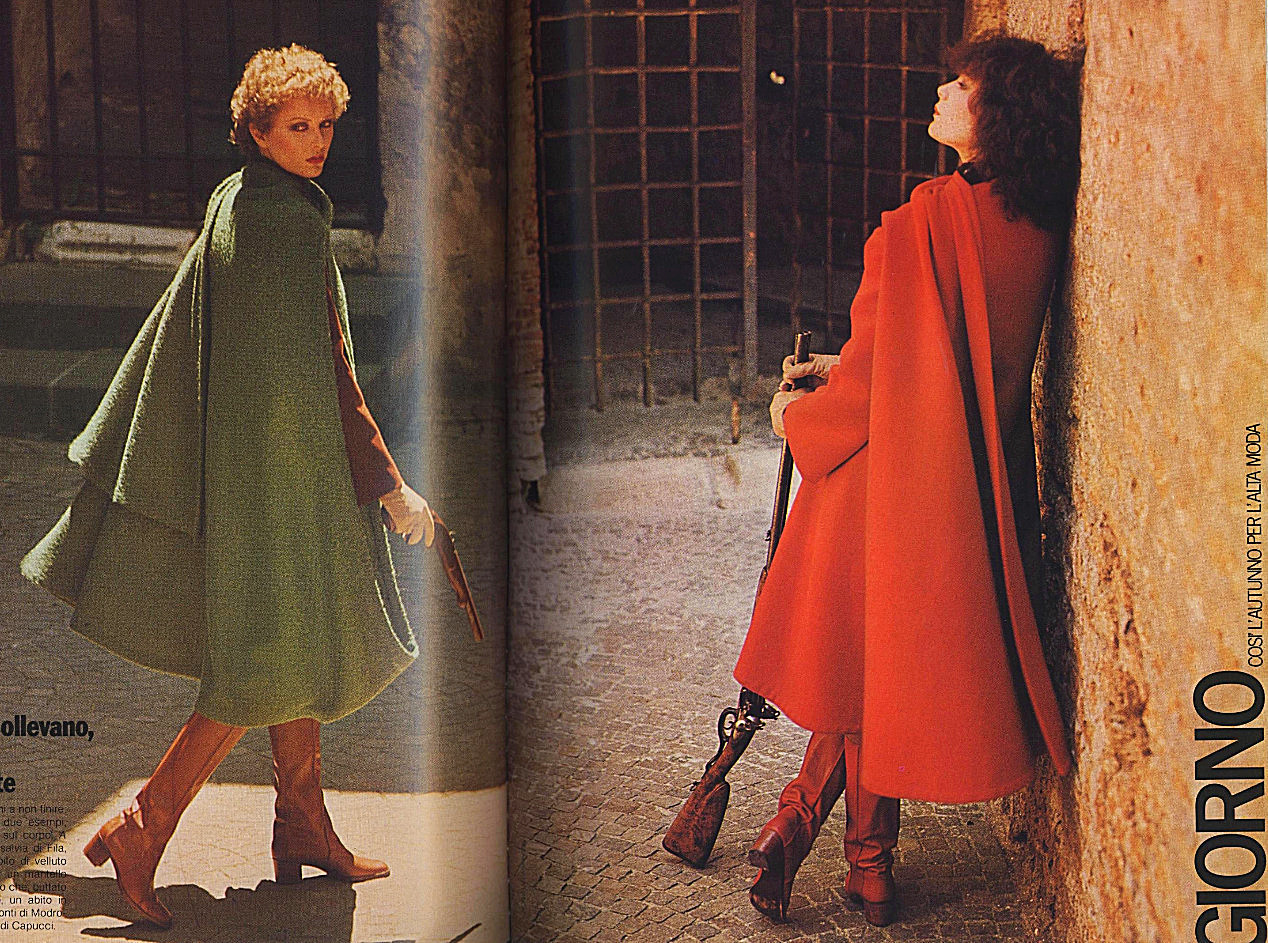 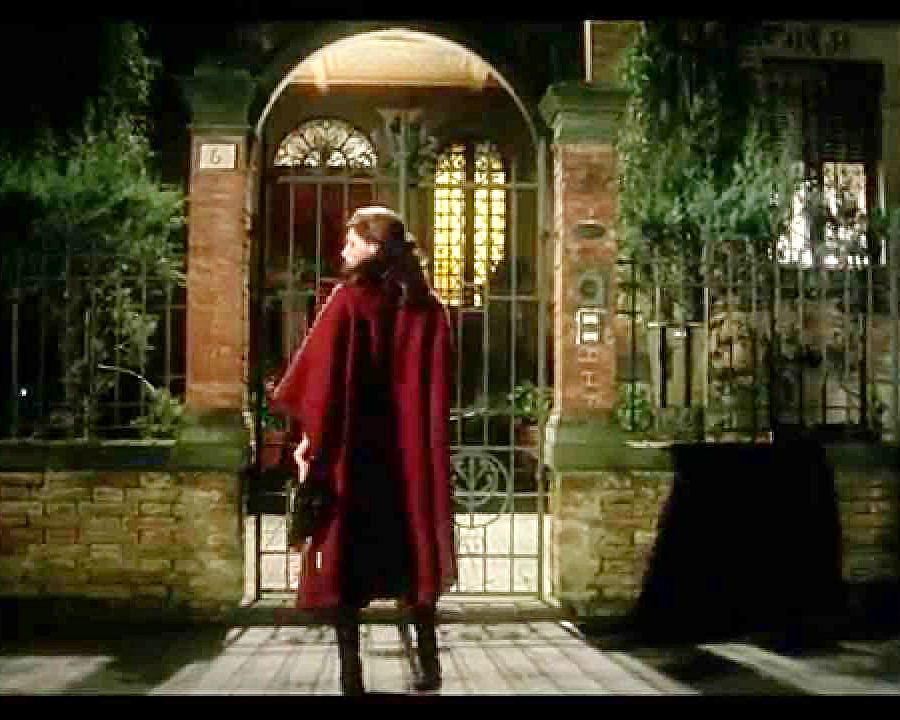 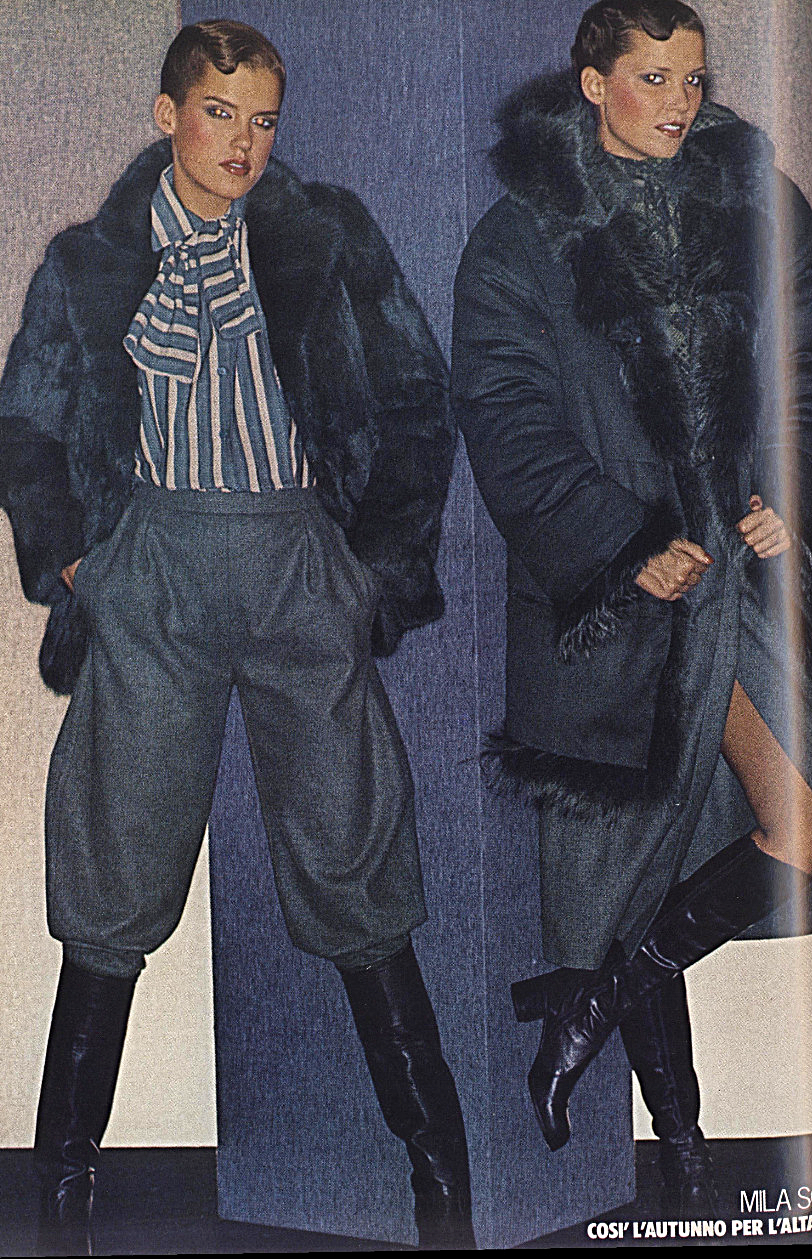 O’Neill’s wardrobe is very haute couture. Her character is the wife of an aristocrat, and, in Italy the late seventies, Italians were still very conservative toward women. As the wife of a wealthy aristocrat, O’Neill certainly would NOT be wearing a low-cut blouse or anything very trendy. Her look had to be very tailored and made of the best materials and craftsmanship money could buy. In every scene her clothing is completely put together in an ensemble that could easily have sprung from the September issue of Vogue Italia or haute couture runway show. She wears matching jewelry by Bulgari with every ensemble. We never see her without earrings that match her necklace, and sometimes large but tasteful brooches adorn a sweater, suit jacket, or cape-like coat. In the opening credits, she wears the first of several beautiful hats in a fedora style. The opening scene is the only scene in which her coat is short with a wide fur collar. As seen in Vogue in 1976, coat styles were predominantly long.

Other coats she wore had a long, wide-cape style with two tiers of the same fabric. The style of coat in the film is so beautifully cut it almost has a geometric quality to it, in deep jewel-tone purple, it also includes an elegant hood. All of the skirts are long and shown in autumn colors or deep jewel tones. They are worn with suede boots that go to the calf or knee. Rafale Salato provided O’Neill’s shoes and boots. Salato was a designer in the 1960’s and 70’s who worked under well-known clothing designer, Pino Lancetti, and created shoes that accompanied Lancetti’s couture clothing. He is also credited with the footwear accompanying the cape-style coats for Vogue Italia in the September, 1976, issue. A credit is given to “Venturi” for the hats worn in the film and there were two full-page ads in Vogue Italia, September 1976 for Venturi designs.

Venturi entered the fashion business in 1974 and worked with popular companies like Domitilla. Graziella Ronchi hired Venturi in 1979 to design for her Erreuno collections. He was in charge

of developing and establishing the soft, neutral look combined with an architectural style that later became trademark of the company. He moved to Milan and established his own label ready-to-wear in 1979. It is possible that he is the "Venturi" credited in the film, as he was designing in Florence, Italy, in 1974 until 1979.

Many of the fashions I saw in Vogue Italia for September, 1976, did have a considerably layered look. This is consistent with much of the clothing O’Neill’s character, Virginia, wore in the film — turtleneck sweaters with a blouse or second top over them and possibly even a light sweater over the blouse and a coat or cape. Americans had a layered look that was similar from 1976 to 1978, but the clothing in Vogue Italia for 1976 feels heavier. It seems that Italian fashion wouldn't start to adopt a “softer look” like the ones in American Vogue in September, 1977, until 1979.

Virginia’s sister in-law Gloria, is a kind of corrupt character. In one scene, she brags of sleeping with more than fifty men — very taboo in Italy. She says that one of these men was from the Vatican, hinting that he was probably a member of the clergy. The comment was probably director Lucio Fulci's way of making a pot shot at the Catholic Church he was known to despise. It was the lover from the Vatican who gave Gloria the watch that she in turn gives to Virginia. The watch plays the seven notes heard in Virginia’s vision, and it has a pivital role in the story. It is interesting that Gloria’s clothing is slightly more in line with the models in The Eyes of Laura Mars. She wears the Russian look popularized by Yves Saint Laurent and exotic look we see in Lancetti’s clothing line in Vogue Italia, 1976.